WHAT IS THE STATE OF PLAY AFTER DHUUSAMAREEB 3? 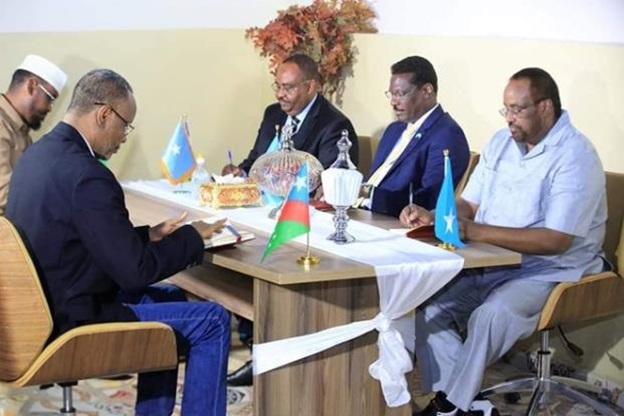 Several months ago, a not-so-complicated secret plan was afoot to have the lower house of parliament announce provisions to extend their term of office and that of the President. Supporters of President Farmaajo were saying so in private. At a public event, the current care-taker PM (a position not provided for in the constitution), Mr. Mahdi Guuleed (then a deputy PM), harangued MPs not to leave office unless a parliament elected by a one-person-one-vote (OPOV) election model was there to replace them, and to set that position by statute. These extra-constitutional instructions, coupled with erroneous public statements made by the President about 'a continuity of government' (interpreted as a continuity of himself in power), made his endless blather about OPOV to be seen as a sheer bunk and himself a man resorting to insincerity or sharp practice.

Thus while Mr. Farmaajo's disdain for the political process was well known, the secret plans mentioned above were tantamount to a 'coup d'état.' Do not be surprised by my use of the term 'coup d'état' because 'coup d'état' does not only mean 'the illegal overthrow and seizure of power through violence, which is often led by the military'. A coup could also be hatched by the 'infiltration of a small but critical segment of the state apparatus (in this case a few strategically well-placed individuals, including Messrs. Farmaajo, Mursal - the speaker of the lower house and his deputy Muudey, and other apologists for the late dictator's regime), which is then used to displace the government from its control of the remainder.'

But the conspirators of the secret plan made a fundamental error of misjudgment. They forgot that when their hero, the late dictator Siyad Barre, staged the coup at the end of the first decade of independence, the embryonic state's power was concentrated in Mogadishu, with no other political centers in existence, and there was almost a complete absence of an educated class. The coup plotters of 1969 were vested with all the crushing powers of the post-colonial state machinery, and their conduct was not constrained by any notions of legality or by the ethical standards that any functioning political community must enforce, 'even if only to the extent of requiring hypocrisy and discretion on the part of violators.' Their conduct was also not restrained by ordinary political resistance because Siyad Barre, the old servant of the empire that he was, abolished the Constitution and all democratic structures, and ensured his enduring monopoly of power through violence and force of arms.

Mr. Farmaajo and Co. could not figure out that the situation we are in today is the complete opposite of the one that prevailed back then. For a start, political power is not concentrated in Mogadishu to lord it over the rest of the country. Power is dispersed among the people through FMSs, not to mention the power center at the sprawling international civilian and military camp in Halane, Mogadishu. The FMSs have a growing organic nexus with their citizens. Some have already built while others are mustering the capacity to build political communities who shall henceforth create, re-create and abide by the existing principles of political obligation - 'the moral duty of citizens to obey the laws of their state.' There's also going to be an organic nexus between these political communities and the growing educated class at home and abroad, and also between them and their brethren in the diaspora.

What we see today is that genuine political communities are emerging across the country, and FMSs are in a pole position to utilize the vast reservoir of energy and potential untapped at the grassroots. It was their absence on any significant scale that left the country so cruelly exposed to the coup of Siyad Barre some fifty plus years ago because of the passivity of the population. On coming to office, Mr. Farmaajo asserted his monopoly of power and, true to a dictator in the making, started dismantling core elements of the provisional constitution: the independence of parliament; the principles of the federal system enshrined in the constitution; and freedom of expression. With the city of Mogadishu subjected to high security measures came the denial of basic freedoms, the absence of the rule of law, as well as brutality and merciless attacks on civilians. The feeble opposition lacked the effective frameworks for effective opposition of any kind.

FMS leaders have stepped up and assumed responsibility for resisting these threats of new dictatorship and repressive rule. Puntland and Jubbaland leaders, in particular, must be credited with making a notable contribution to the principle that political opposition is held to be legal, legitimate and even necessary because there will simply be no real test of the competence of any leader without such opposition in the elections. Once these leaders realized that the 2020/2021 election cycle was in jeopardy, they provided real leadership involving persuasion in the service of setting an agenda, building networks, and accomplishing things in cooperation with the other three FMS leaders and have successfully co-organized Dhuusamareeb 1 and 2.

To this end, all the five FMS leaders have taken their responsibility very seriously to cooperate to promote and uphold the constitution of the FGS. The outcome of those meetings reaffirmed the constitutional position that elections are the founding pillars of Somalia's new political system and that they must be held in time, as there can be no extension to the mandate of either the President or that of Parliament. Dhuusamareeb 3 was commandeered by Farmaajo, but he was still pinned down to the nitty-gritty of the anticipated elections by the FMS leaders in attendance.

And now a brief lesson of political history. Somalia has experienced several constitutional failures. Its post-colonial period of competitive democracy (1960-69) ended in military dictatorship. That dictatorship was toppled by popular uprising and armed rebellion some two plus decades later. In the view of some experts, the failings of the post-colonial state arouse because insufficient consideration was given to the separation of powers between the executive, legislative and judicial authorities at the central level, or to creating self-governing territorial units at a more local level. Despite the existence of a proportional representation electoral system, the unitary structure of the state encouraged everyone to believe that power was concentrated at the center and that it was essential to be part of the majority alliance at the center. For example, in March 1969, over a thousand candidates who belong to some sixty-two 'parties' competed for 123 seats in the National Assembly, but the Somali Youth League (SYL) was able to establish a one-party regime when almost all independents joined the governing party.

So much for political parties! Of course, we need political parties because they are a defining element of representative democracy and the process of democratization. But we need to learn a lesson from the first democratic Somalia. That lesson should be that we just don't need any political party! We need strong, disciplined party organizations that field candidates to win elections and thereby implement their agenda. But to do so we need to build viable and sustainable party systems that are democratically organized and representative of society, and start serving democracy between election campaigns. Such parties can thus gain in public trust and support as a consequence. I'm afraid that will take a period of years, rather than days, weeks, or months.

Good leadership promotes mutual recognition of the independent existence of the other and her/his needs and experiences, where recognition has elements of both acceptance and valuation. In a post-conflict situation like ours, the role of leadership becomes one of engaging with all groups to bring forth a common vision in which all can share. Unfortunately, that is not the leadership style of the President. Mr. Farmaajo seems to have a view of leadership in the traditional sense of power and position to exert authority and control, and to overcome resistance. Such a leadership style is utterly inadequate and even counterproductive in the world of Somali politics, and we have the proof for it now that he has completely missed the mark.

We learn that there are four new imperatives of post-conflict leadership in governance: (1) fostering collaboration; (2) building resilience and adaptive capacity; (3) resolving ethical concerns through dialogue; and (4) engaging citizens. In my view, the leadership position of FMS Presidents is much more closer to these ideals than Mr. Farmaajo could ever hope to do. We can see them in action today as they continue to engage with citizens and leaders of all communities in the capital city to hear their concerns and priorities before (hopefully) everyone finally sits down together in the anticipated big conference to adopt a common vision about the immediate task to hand - the elections of 2020/2021.

Dr. Aweys Omar Mohamoud (@AweysOMohamoud) has a PhD from the Institute of Education, University College London (UCL). He has previously taught at the Defence Academy of the United Kingdom at Shrivenham in southwestern Oxfordshire. More recently, he worked as an advisor to the Ministry of Education, Culture & Higher Education (MoECHE), Federal Government of Somalia in Mogadishu.

Miller, C. (2005) A GLOSSARY OF TERMS AND CONCEPTS IN PEACE AND CONFLICT STUDIES. UNIVERSITY OF PEACE, p. 28.

See A study of decentralized political structures for Somalia: a menu of options. Report prepared by consultants from the London School of Economics and Political Science, August 1995, p. 75.