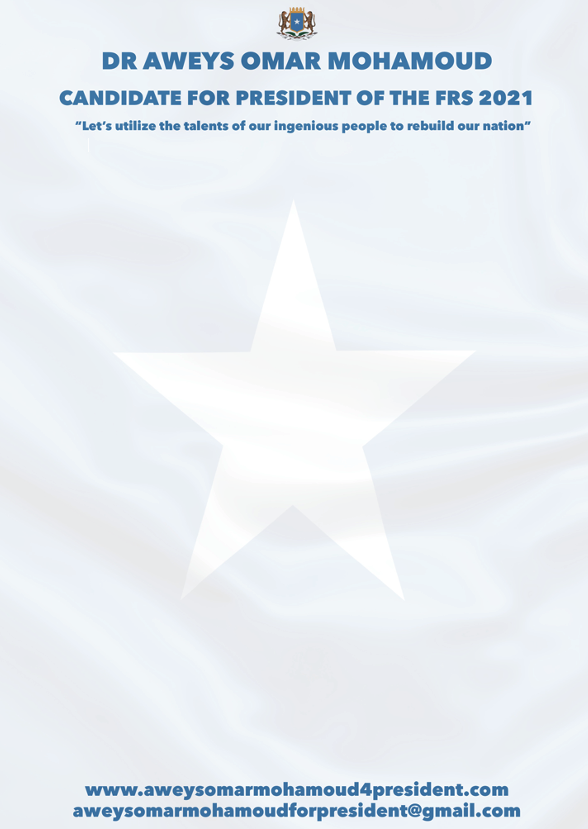 Yesterday's announcement that the FGS will go ahead with the 2021 elections with no resolution to the continuing electoral crisis and no reference to two FMSs, Puntland and Jubbaland, and the political opposition takes us much closer to the violent collapse of the nascent institutions.

Farmaaja's past four years in power has been marked by an authoritarian style of leadership which displays uncompromising power. The authoritarian personality believes in simple answers and polemics, hence the warmth by Mr. Farmaajo towards crooked and feeble-minded people. As we have seen time and again, he surrounds himself with weak and vulnerable individuals with innate deferential submission to power and authority.

These individuals grant him the ultimate accolade - praise and approval of what he dictates to them. Yesterday morning's press conference by the Prime Minister, Mr. Mohamed Hussein Roble, and the three FMS Presidents of Galmudug, Hirshabeele, and Southwest, and the Mayor of Mogadishu is a perfect example of extreme obedience and unquestioning respect for and submission to Mr. Farmaaja's unconstitutionally exercised authority by these individuals. We must remember that these three Presidents were all, in polite speak, 'elected' under Mr. Farmaajo. The Mayor is an appointee, not an elected official.

Unbeknown to Mr. Farmaajo and his motley crew of fools, bitter experience has taught the Somali people that the use of a strong central government that concentrates power in the hands of a ruthless leader that is not constitutionally responsible to the people, who undermines the rule of law, separation of powers, political pluralism and democratic voting can spell disaster for our country. Mr. Farmaajo has done all of that and no one held him to account.

Yesterday's announcement would not be a big news story to most people who are engaged in politics, which is pretty much the whole country, and especially to the opponents of Mr. Farmaajo, for we knew all along that this is what he planned to do. Farmaajo supporters and some of his fellow clansmen were freely speaking to all and sundry to tell us exactly what would happen come the start of the new year 2021.

To be perfectly clear, the story that Mr. Farmaajo is manipulating and controlling the process by deceptive and dishonest means to ensure that he cannot lose the election is an old story. The new story, from yesterday's announcement, is that he's no longer trying to steal the election without being caught. He will do whatever he has to do in full view of everyone to make sure that his government holds a counterfeit election just to provide a rubber stamp for his retention of power.

The methods being used to overcome resistance include the so-called art of electoral bribery, divide and rule, violence as a political strategy, fake news propagated by hired social media loonies, and fooling as well as threatening (by the unstated threat of a PNG, à la Nicholas Haysom, former SRSG) representatives of international partners in Somalia.

Credible reports abound about how huge amounts of cash were distributed to members of particular sub-clans in Mogadishu by manipulating state access to resources. These cash payments ($130-$200 apiece, and more for particular sub-clan personages) were made in the past few days to distribute patronage and gifts. Political violence has been threatened (remember the infamous statement made by the Mayor of Mogadishu) and used to intimidate opponents, mobilise supporters and cow the media.

The people are seeing what might be coming their way as Farmaajo begins to apply fuller restraints on freedoms of expression and association, and also limit independent voices and institutions, including civil society groups and the media. Deploying repression is meant to simultaneously divide the opposition and reinforce the unity of Farmaajo partisans.

The most worrying aspect of it all is that Mr. Farmaajo and his apologists are rekindling bitter mutual clan recriminations, hate narratives and old patterns of violence in Mogadishu by their cheap political demagoguery and cynical reconstruction of exclusive clan identities which served as a prelude to the fratricidal violence that Mogadishu saw during the era of clan wars back in the 1990s.

Let us remember that those clan wars were bequeathed on the city and its inhabitants by the state-sponsored violence and conflict under the late dictator. We now have a new dictator in town in the image and clan ancestry of Siyad Barre and he's back in the business of reconfiguring those same divisive clan identities and exclusionary narratives for the purposes of unconstitutionally maintaining power through counterfeit elections that are rigged from the start.

Let us also remember that, after a long spell of cruel clan violence and fratricidal conflict, communities in Mogadishu have developed a modus vivendi based on the need for recognition, recounting and reconciliation which became a transformative factor in the history of the intra-Hawiye civil war and led to the ongoing social reconstruction and moral repair in the city. They have also developed more ways than one to balance power and keep warfare in check.

Sadly, the late dictator's theories and practice of discrimination, persecution, and forced exile of individuals from politically targeted clans are now in train under Farmaajo's new dictatorship and may well become a prelude to a renewed civil war.

Yesterday's counterfeit election announcement portrays Mr. Farmaajo as a leader firmly entrenched and impregnable. But he and the fools around him must be warned that no dictatorship can withstand the concerted political, economic and social defiance of the people. Mogadishu-wide protests that started mid-December some thirty years ago led to the overthrow of the late dictator's regime and the collapse of the state. Their recent appearance again in Mogadishu at this moment of grave constitutional crisis is an omen of disaster for the hard-won peace in the city and beyond.

The international community must beware of the deadly serious constitutional crisis that Somalia stares in the face and the tensions that are rising in Mogadishu which could foreshadow a serious risk of political violence and institutional collapse.

The human catastrophe in Somalia that reached international attention in the 1990s did not arise overnight. Observers have documented the frailty and looming failure of political institutions in the late 1980s in great detail. These included reports by human rights groups, Western governments and international NGOs but, above all, the Somali people.

International actors that had maintained a significant economic and military assistance relationships at the time recognized the warning signs of disaster but lacked interest to act and help change course. Left to its own devices, Somalia collapsed into anarchy, with the overthrow of Siyad Barre at the beginning of 1991.

As they say, hindsight is always twenty-twenty, but one can make the case that creative and concerted attention by external actors with some leverage and resources would have helped. Today there are UNSOM, AU, AMISOM and Somalia's international partners on the ground. The creative and concerted attention and resources necessary to discourage a relapse into civil war are far less extensive, as they were back then in the late 1980s, than what will be required to assist in reassembling a viable order once anarchy was unleashed again. All of the above-named bodies owe it to the downtrodden people of Somalia to come up with new ideas and strategies to prevent a relapse into an avoidable renewed armed conflict in the not-too-distant future.

As part of a series of essays under the title 'Let's confront Framaaja's dictatorship by defiance and mobilization of our people', I shall present in my next statement a verbatim transcription of yesterday's statements by the Prime Minister and the President of Galmudug State together with my analysis.