A WORD OF ADVICE TO PRESIDENT FARMAAJO, Rigging the elections will not return you to power! 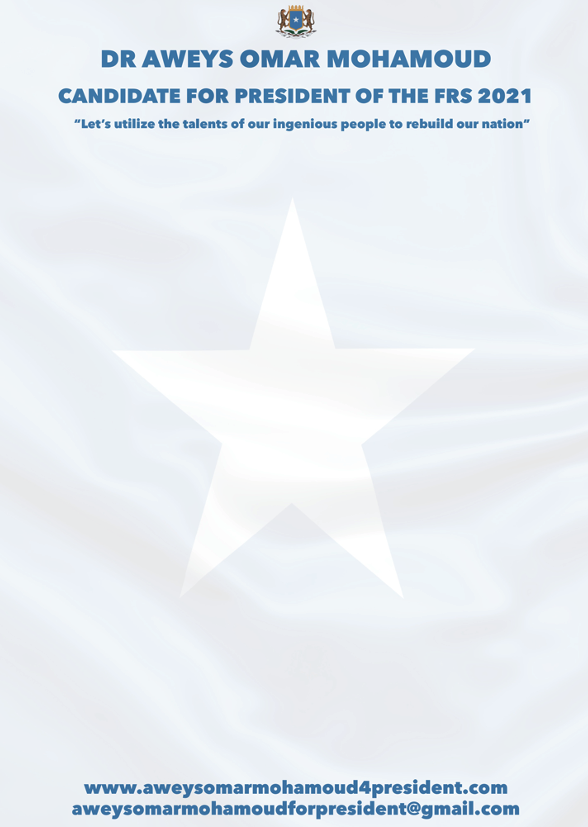 To write this piece, I have read and considered the views contained in the following documents: 1) Faafin degdeg ah, 8 November 2020, the position and decision of 12 Presidential Candidates vis-à-vis their participation in the elections of 2020/2021; 2) the letter by the Speaker of the Upper House to the SRSG, Mr. James Swan, and the AU's SR, Mr. Francisco Madeira, dated 13 November 2020. I have also come across the views of various politicians, civil society leaders and ordinary citizens online, on the radio, and through social media.

All have expressed serious concerns about some of the individuals appointed to the Federal Electoral Implementation Team (FEIT) by the FGS. They all attest to the fact that these appointments are not only a gross violation of the agreement reached in September between the Federal Government of Somalia (FGS) and Federal Members States (FMSs), but that they are also in complete contradiction of the Provisional Constitution of the FGS as well as with international principles for genuine democratic elections. I concur with them and express my total support for their position.

We may ask ourselves; what counts as rigging? The dictionary definition of rigging is to manipulate or control, usually by deceptive or dishonest means. Election rigging represents an illegitimate and undemocratic means of tilting the playing field clearly in the favour of one party (candidate, in this instance) at the expense of others.

This is what is accused of Mr. Farmaajo and his team. The substance of the accusation is that the FGS appointed individuals who are not politically impartial to the Federal Electoral Implementation Team (FEIT), the body charged with administering the electoral process. They are also accused of using illegitimate means when ‘appointing the electoral committee responsible for managing the election of MPs from the Northern Regions'.

Many people believe that, unless President Farmaajo changes course, the contest is rigged from the start. By these appointments, the regime of Mr. Farmaajo had shone a light on the fraud that they intend to carry out in the shadows. He is said to be adopting a range of strategies, including vote buying, to ensure that he cannot lose. Of course, vote buying has a history here, and involves the direct purchase of MP's support through cash gifts.

The past few elections, albeit with vote buying allegations, including the last one that brought Mr. Farmaajo himself to power, had been truly transformative - meaning that they generated a transfer of power and (one could argue) delivered political change of sorts.

The obvious question must be why is Mr. Farmaajo so keen to retain power? Let us separate fact from fiction. President Farmaajo failed to deliver credible leadership to foster a sense of common national purpose. Out of the 54 independent African countries, Somalia remains the lowest scorer in all the IIAG indicators (security and rule of law; accountability and transparency; inclusion, equality and rights; foundations for economic opportunity; and human development in terms of access to healthcare, education, social protection and sustainable environment), over the ten-year period 2010-2019.

Mr. Farmaajo is still keeping up the fiction that his administration is advancing ‘peace and life'! Which peace, and which life, Mr. President?

There's a piece of good news, not from Mr. Farmaajo but from the country. Despite being the lowest scorer in all the above indicators, Somalia is joint most improved country over the 5-year period alongside Namibia. In terms of overall governance, Somalia had the lowest score at 19.2% in 2019, and ranked 54th out of 54 countries of independent Africa in 2019 but had a remarkable trend of +5.7 between 2010-2019. This trend shows increasing improvement and progress over the last ten years, with the rate of improvement increasing in the latest five years.

The Somali people's desire for change and inspiration led to these leadership changes. The issues debated, priorities articulated, and the solutions proposed during those elections all combined to rekindle a sense of belonging, a sense of nationhood and Somaalinimo, even if the incoming administration wasn't always able to form policy initiatives and actionable post-election agenda to move the country forward. In other words, the leadership changes alone were enough to inspire people to hope and to suffer without complaining for a better tomorrow.

Somalia's post-conflict federalism and decentralization reforms follow the logic of separating groups by distributing political power. As we go forward, this is expected to reduce the stakes of competition for state power and can even, as some argue, strengthen the rule of law and create good governance. Of course, the federal constitution is not yet ratified. But if well-managed and enough trust develops between the Somali people, a federation can satisfy both those who want a more substantial central governing capability, and those who want strong regional governments. That may be another source of where these increasing improvements may be coming from!

Mr. Farmaajo, with his authoritarian tendencies, seems to have a completely different idea to my more hopeful prognosis. He may be of the view that the election itself will shore up his grip on power. But what is the formula? Think about it, if an authoritarian leader can hold elections without losing, then he can have his cake and eat it - boosting his regime's resources and legitimacy while retaining his grip on power.

That is a play book from elsewhere, Mr. Farmaajo, not from Somalia. The Somali people and their leaders won't let you do that. Just accept that genuine democratic elections (albeit indirect) are an expression of sovereignty, which belongs to the people of Somalia, the free expression of whose will proves the basis for the authority and legitimacy of government.

Finally, I hereby lend my support to the three-day consultative meeting of the Union of Presidential Candidates for Somalia 2020/2021 that started in Mogadishu yesterday, and whose aim was to bring the government of President Farmaajo to accept that only through genuine democratic elections, on basis established by law, shall we be able to settle the question of who shall have the legitimacy to govern our country in the name of the Somali people and in their interests, come 9th February 2021.